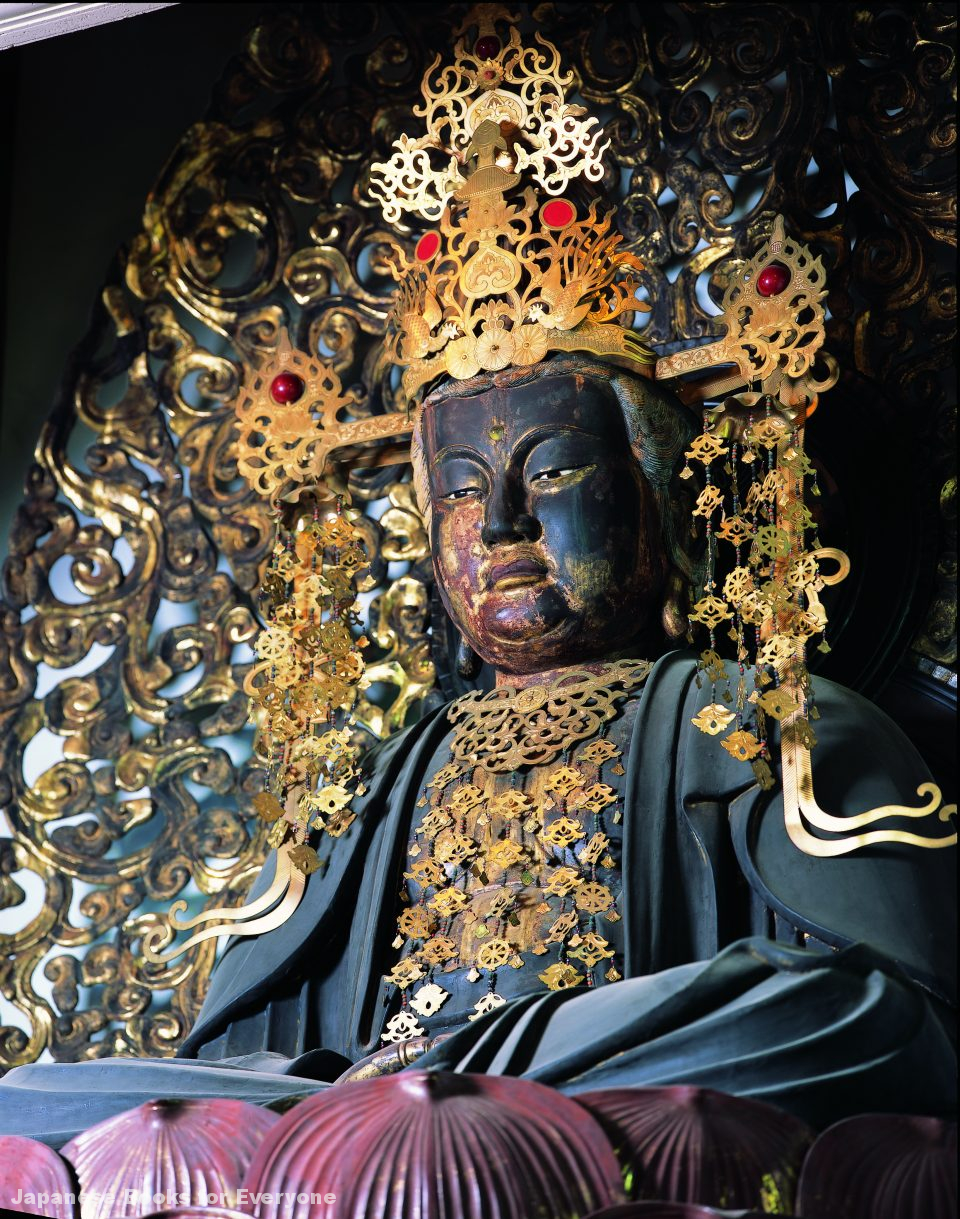 The Buddha of Kegon

Seated statue of Hokan Shaka Nyorai
Wood; figure height 260.0 cm; Kamakura period (1185-1333).
When the Butsuden was opened on December 8, 1282 (Koan 5), the Hokan Shaka Nyorai (then called Vairocana Buddha) was enshrined as the principal image at the same time that a memorial service (Kuyo) was held. Made using the yosegi-zukuri technique (assembly of individual components of hollowed-out wood, rather than carving from a single block), the head of the figure could be easily removed to safety in case of fire. The crown, jeweled necklace, halo, pedestal and cloth draped over the figure were all later additions.

Photographed below:
Butsuden (Main Hall)
Reinforced concrete; central ridge height 18.5 m; Showa period (1926-1989).
Made of reinforced concrete according to a blueprint from the Edo period, with a traditional Zen-style facade.The framed calligraphy above the entrance was a gift of Emperor Go-Kogon (1338-1374) in 1378 and reads “Daikomyohoden” (Treasure House of the Great Shining Light). 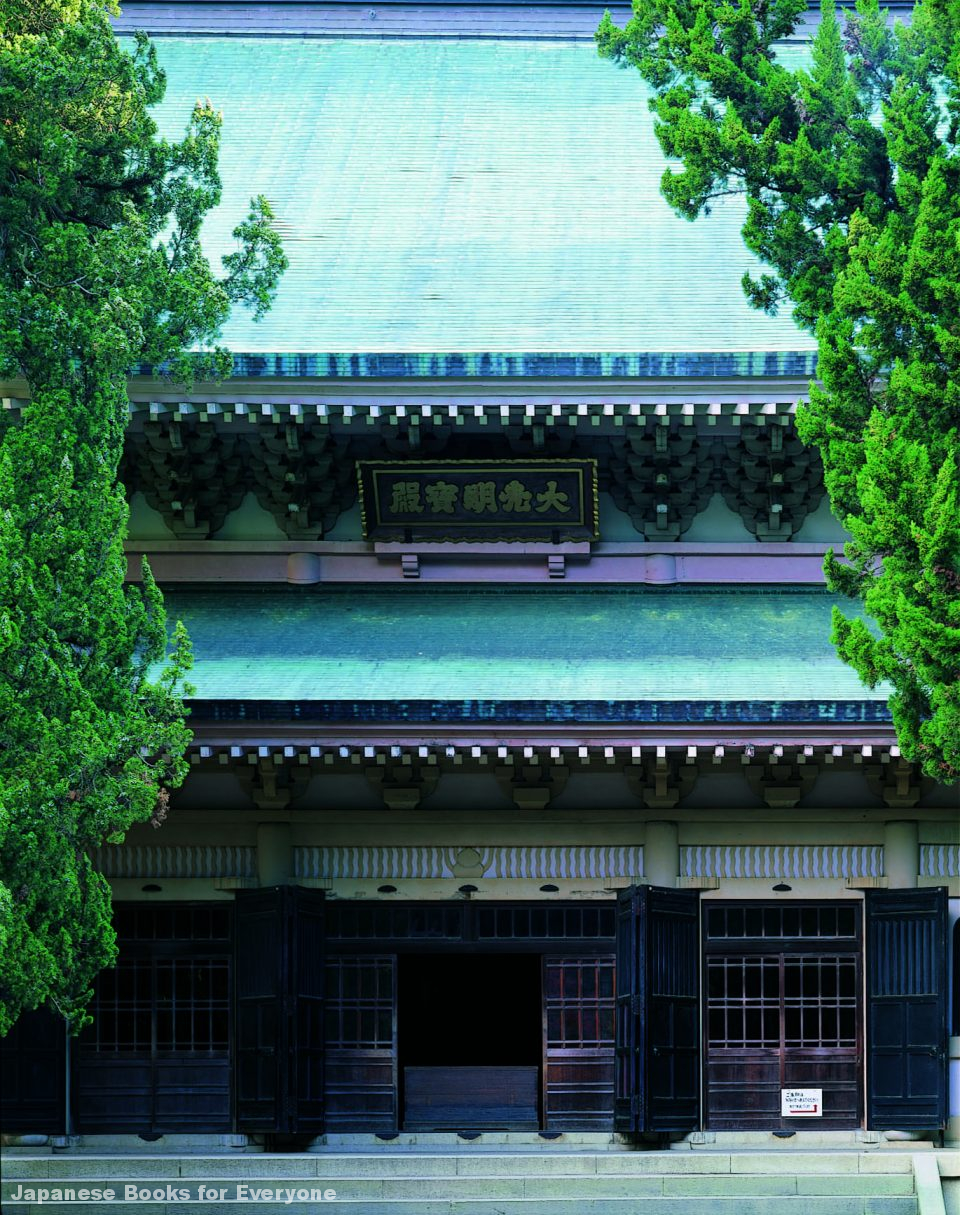 Adorned with a magnificent crown, a carving of the Buddha Shakyamuni Nyorai sits enshrined on the dais of the spacious Butsuden (Main Hall) in a posture of deep meditation.

Figures of Nyorai usually do not have jewelry or other accessories, and the hair is usually done in tight curls that resemble sea shells. However, the main image at Engaku-ji is graced with a jeweled necklace, and a crown adorns the hair which is pulled back in a high chignon, indicating the attributes of a bodhisattva rather than a Buddha.

This type of crowned Shaka Nyorai is also called the Buddha of Kegon, which is explained in the Avatamsaka Sutra, the central scripture of Zen Buddhism, as the foundational Vairocana Buddha and Shakyamuni existing together simultaneously as one body. Hokan Shaka Nyorai was handed down from China’s Song Dynasty and has long been the focus of Zen temples in Kamakura, and the principal image at Engaku-ji is the earliest and largest among those figures.

The Butsuden was destroyed by fire in 1563 (Eiroku 6), but the principal image narrowly escaped complete destruction, and the face was saved. The present body was carved in 1625 (Kan-ei 2), and accordingly, the head dates to the Kamakura period, but the body is from the Edo period. The style of carving from Song-dynasty China combines splendor with the austerity of expression appropriate to Zen temples.

Housing the central image of worship, the Butsuden is sometimes called Daikomyo, the Treasure House of the Great Shining Light, or Fukomyoden, the Hall of the Universal Light. Since its construction in 1282 (Koan 5), it has been rebuilt many times following a number of disasters. The construction dating from the early Edo period collapsed in the Great Kanto Earthquake of 1923 (Taisho 12), and the current structure was rebuilt in 1964 (Showa 39) utilizing reinforced concrete, following a blueprint from 1573 (Genki 4), and is an impressive example of classic Zen architecture.

A fully illustrated guide to Buddhist statuary in Japan.

Written in both English and Japanese. This unique handbook provides a handy introduction to Butsuzo (Buddhist statues), ranging from types and materials to the meaning of different hairstyles and attire, and even recommended temples. This is a must-read guidebook for anyone planning to visit Japan, and a perfect gift for readers interested in Buddhism.

The World's Only Living Stone…