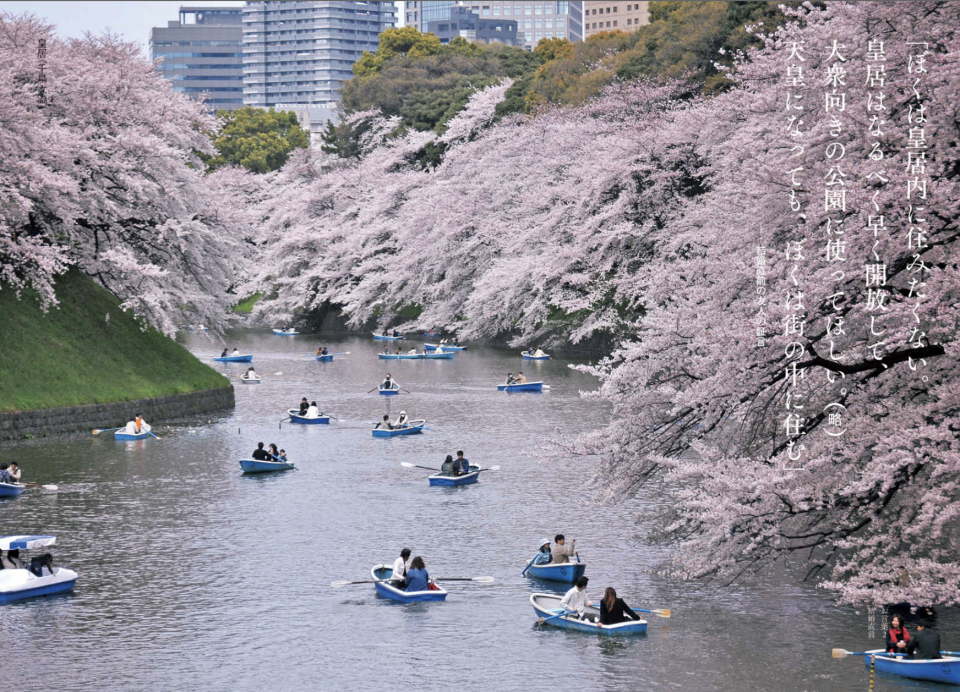 The Emperor of Japan

Kōji Yabe, author of Why Japan Can’t Give up its Military Bases and Nuclear Power Plants (Nippon wa Naze , 「 Kichi 」 to 「 Genpatsu 」 o Tomerarenai no ka; Shueisha Inc.), What You Need to Know: How the Sovereignty Power of Japan was Lost (Shite wa ikenai: 2 Nippon no Shuken wa Kōshite Ushinawareta; Kōdansha Gendai Shinsho), is known for detailed studies revealing the darkness of postwar history in the simplest of terms. With his best-selling work, The Emperor’s Message (Ten’nō Messeji), Yabe brings words which stitch together the limits of human thought as the Emperor of Japan prepares to step down and the country enters an entirely new era.

Photographed above: visitors tour the Imperial Palace moat during the height of cherry blossom season. "I don’t want to live at the Imperial Palace. I want to open the grounds as fast as possible and make it a park for everyone. Even though I’ve become the emperor, I live in town." —Emperor Akihito

Photographed below: A view of the Imperial Palace. “Because I have no experience as an ordinary Japanese person, I’ve never once thought of what I wanted to do with my life. I’ve never thought about choosing any other path than that of the Imperial household.”
—Emperor Akihito, American news conference, 1987

Shogakukan caught up with Yabe to get the inside scoop on why this book and why now. 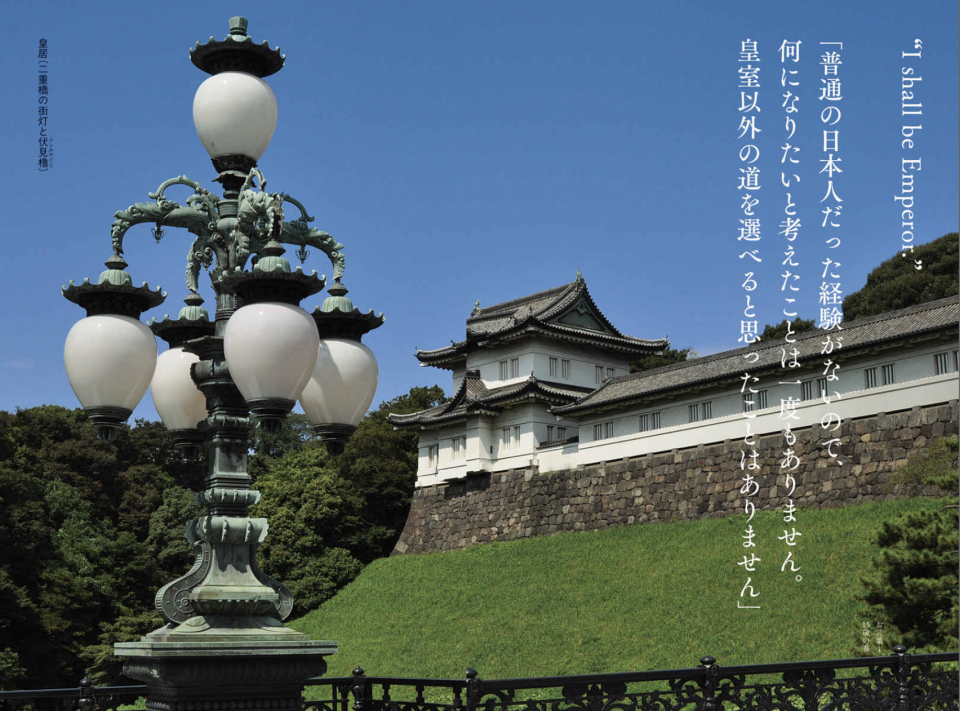 “I was originally an editor, but started researching the military conflicts surrounding Okinawa about eight years ago. That’s when I thought I might try to write a book myself. This publication is derived from a piece I wrote about three years ago called A Message from Emperor Akihito: The Country that Doesn’t Fight (Sensō o shi nai Kuni: Akihito Ten'nō Messēji).

“What made you think of writing a book about the emperor?”—now that I’m a writer, I get this question all the time. Well, it was actually when I started researching Okinawa. When you go there, you see the true state of the nation that one simply can’t see on the mainland. Emperor Akihito was like that himself.

What one sees on mainland Japan is totally different from Okinawa. The image there is very active, and people speak clearly. But I met face-to-face with the biggest contradictions of a postwar Okinawa and started thinking on the depths of those struggles. I then came to see who the person was that built the symbol of the emperor—what he really should be—and was totally taken aback. I thought, “wow, I really didn’t know this person,” and started wondering if he wasn’t some magnificent intellectual. 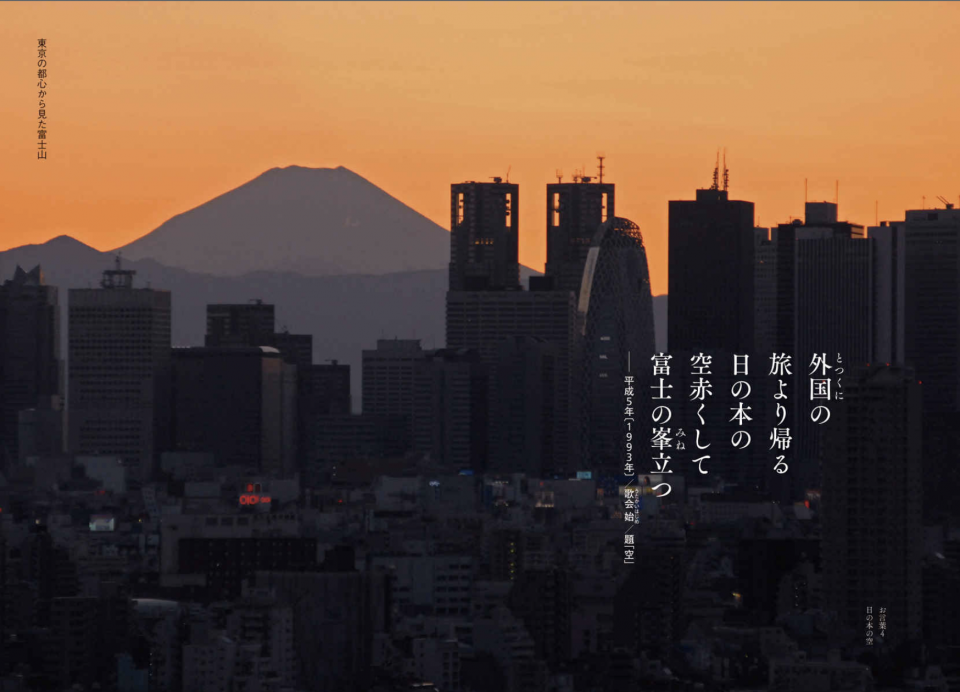 There really isn’t another great intellectual like that in Japan today. Any time a huge disaster occurs, everybody looks around, but there’s really no one in a social position whose words you’d truly want to hear. But with Akihito, I thought I’d really found such a person.

I’m not saying he’s remarkable because he’s the emperor. He’s been someone who is able to be revered as a great intellectual—someone who combined true thinking with action. My knowledge as a person of publishing made me think, “I want everyone to know this.” That’s why I wrote this book.

It’s a ryuka style Okinawan poem, and it’s written in Okinawan Japanese. No matter how many times I read it, it’s incredible. It was this poem that was the impetus for my wanting to write the book, and it’s a story I heard from my friends in Okinawa.

So, I can leave it at that, right? Certainly not. While Akihito was restricted from issuing political statements after the war, he was able to convey his thoughts from a place just short of stepping over the boundary. Sure enough, we all listened and took his words to heart. This is a book driven by such thinking, a book that, for the first time, expresses the general thought surrounding Emperor Akihito’s upcoming abdication and his final birthday celebration, and records his words over the last three years.

As for how Japan can be be a nation of peace—I followed the Emperor’s words and deepest contemplations so we can all ruminate on this major issue together.”

“Because I have no experience as an ordinary Japanese person, I’ve never once thought of what I wanted to do with my life. I’ve never thought about choosing any other path than that of the Imperial household.” —Emperor Akihito, American news conference, 1987

“It doesn’t matter if stones are thrown. I want to walk amongst the people without fearing such things.” —Emperor Akihito, prior to visiting Okinawa, 1975

“Although it may be shameful to have others think me weak, I do not live in despair.” —Empress Michiko, 1980