TOP Features In Search of the Shining Prince, From America to Kyoto University 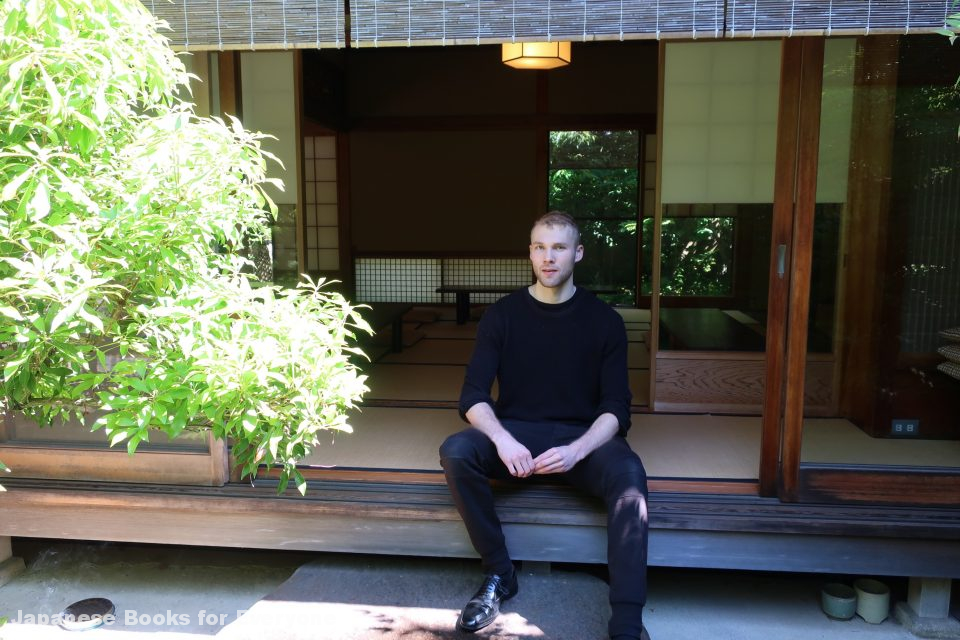 In Search of the Shining Prince, From America to Kyoto University

First year graduate student in Japanese literature at Kyoto University. Born in Germany, grew up in England, educated at Brown University in America. Christopher graduated Brown with a triple concentration in East Asian Studies, Philosophy, and Classics. He spent six months studying abroad at the Kyoto Consortium for Japanese Studies (KCJS) as an undergraduate and, after graduating, enrolled in the graduate program at Kyoto University. He began practicing tea shortly after moving to Kyoto. Pictured in the photograph below are Christopher’s yukata and tea ceremony utensils. He has repurposed for his tea box a gift from his grandmother, a case with a cherry blossom pattern.

Christopher first encountered The Tale of Genji at seventeen when he traveled the world alone for four months between high school and the start of college. On the trip, he assigned himself the task of reading one classic work of literature from each country he was visiting. In Russia, he read The Brothers Karamazov, in China, Dream of the Red Chamber and in Japan, The Tale of Genji (Genji Monogatari). “Just sightseeing, I thought I'd never get a sense for the heart of the country.” A wandering journey from Russia to China, Central Europe, and Greece allowed Christopher to spend over a month in Japan, where he was particularly impressed by Kyoto, the ancient capital. “I would sit in a temple garden and lose myself in The Tale of Genji. When I read it, the city was completely changed and yet somehow exactly same. I would come across fireflies glowing on the banks of the river at night and think I saw just what Genji might have seen.”

Christopher rediscovered The Tale of Genji in his first year at Brown University when he happened to attend a a one-off course on the influence of the work and its protagonist, Hikaru Genji (the Shining Prince). The course’s translation of the text, however, left a completely different impression to the version he had read while traveling Japan. The feeling was to change the direction of Christopher’s life. “That was when I knew. Unless I read the work in the original, I would always be missing something.” Christopher started learning Japanese at once with Shinpen Genji Monogatari (pictured above) as his guide. This volume from Shogakukan's New Edition Collections of Japanese Classical Literature series includes the original text in classical Japanese, a modern translation, and scholarly commentary. “I was very far from being able to read even the translation, but, all the same, I wanted to have the original beside me. It was to be the benchmark of how close I had come. My parents were planning to visit Japan so I begged them to buy me a copy.” After two years of study, Christopher was able to understand the original text. He now studies classical Japanese literature at Kyoto University, and the book crossed the ocean with him as he returned to Japan.

“One of the things that really drew me into The Tale of Genji was the idea of mono no aware (the pathos of things); the sad beauty that comes with the feeling of transience. It seemed so opposed to the Western notion of impermanence as an imperfection. The other thing that really struck me was the poetry. Genji's courtships all begin and end in poetry. The two lovers create a poetic world between themselves, and through it, give expression to their most intimate feelings. In classical Japan, writing poetry was an essential part of everyday life. It still seems incredible that there existed a society in which getting through the day required composing a poem.”  Christopher can now read the original text without the help of modern Japanese or commentary and can even recall many of its poems by heart.

The Tales of Genji, Book 1 (abridged)

Best seller for a thousand years! Selections from a Japanese masterpiece

The only way I can describe the place of The Tale of Genji in the Japanese literary tradition is to compare it to Shakespeare. Every work written after The Tale of Genji owes it some kind of debt. If you want to understand Japanese literature and the roots of Japanese culture, you cannot escape reading The Tale of Genji. Many publishers offer the original text with modern Japanese translation, but Shogakukan’s succeeds in preserving the literary quality of the original while making it easy to understand. This abridged version of The Tale of Genji features all of the major scenes of the original. It is divided into two parts and included in the Reading the Japanese Classics series. The translation is taken from the Shinpen Genji Monogatari and is recommended for first time readers. I think the color drawings at the start of each section really help bring the world of the Shining Prince to life.

A man was at the intersectio…

What happened to a woman in …

In the back alleys of Kyoto,…