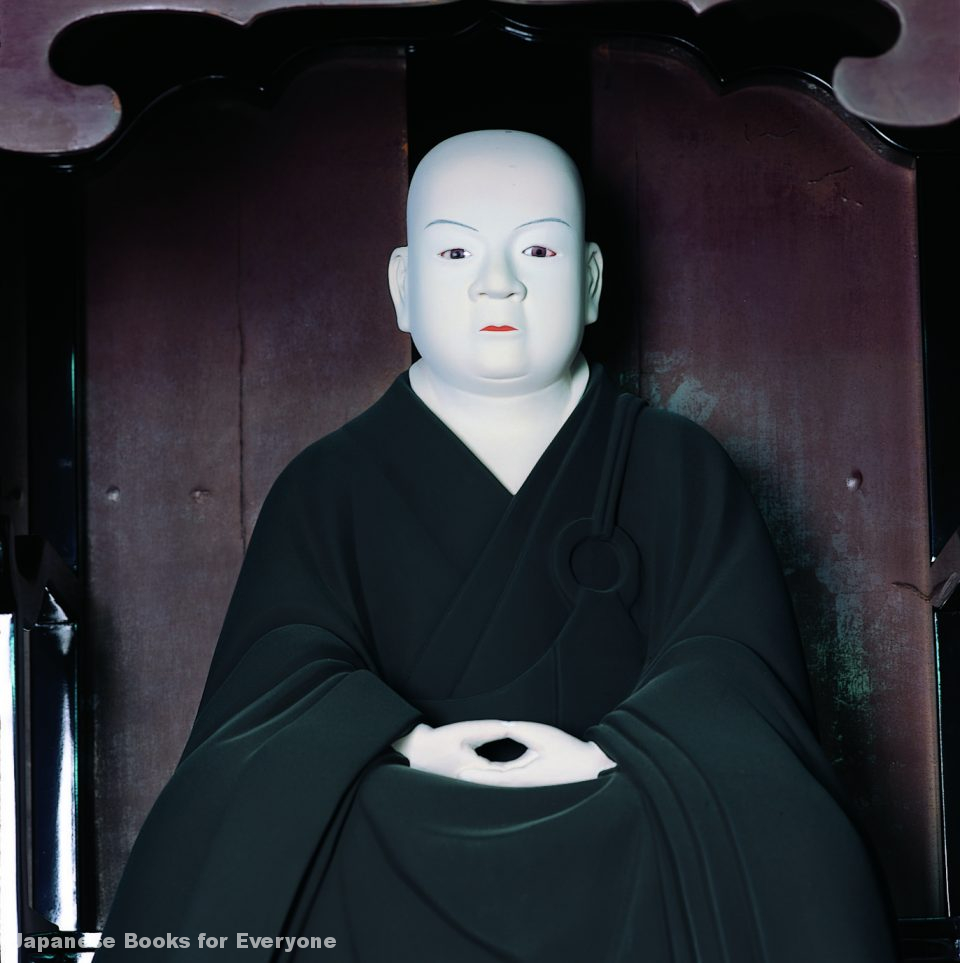 Photographed above:
Statue of Hojo Tokimune, wood; Edo period (1603–1868)
Enshrined in the mausoleum of Tokimune (one of the founders of Enkaku-ji Temple) in the Butsunichi-an sub-temple. Tokimune provided financial support for Engaku-ji as a place of prayer for the shogun, yet became ill two years after founding the temple. As he understood and embraced his destiny, he called the head monk, Mugaku Sogen, to his bedside and took the tonsure. He was given the posthumous Buddhist name of Doko, and died that very day.

The light of Buddhism that was lit by the bonds of Tokimune and Mugaku Sogen continues to shine brightly amidst the scenery of Kita-Kamakura.

The basic tenets of Zen state that humans inherently possess a Buddha-like nature and can attain enlightenment by their own efforts through zazen (seated meditation). Rinzai Zen uses koans (philosophical questions which originate from the founders) as the object of focus to be worked through during zazen, and to thereby achieve understanding.

Why, we might ask, was such an esoteric religion so loved by Tokimune (the 8th regent to the Kamakura Shogunate) and the samurai class? The strict discipline and rigorous pursuit of knowledge for enlightenment through one’s own efforts seem particularly suited, it seems, to warriors. At the time, Kamakura had consciously adopted many aspects of Chinese culture in order to compete with Kyoto for superiority. In fact, the development of both Zen and Song Dynasty-style culture simultaneously spread from the center of Kamakura.

It was thanks to this flourishing of Zen and Song culture that the Engaku-ji temple was founded in Kamakura. Although the temple lost both of its founders after its establishment in 1282, it was able to maintain a grand appearance through the final days of the Kamakura period thanks to the patronage of Tokimune’s son Sadatoki and grandson Takatoki. Even after the fall of the Kamakura shogunate, Engaku-ji received the patronage of both the imperial household and the Ashikaga clan, due to the efforts of subsequent head priest Muso Soseki. Engaku-ji maintained its position as a central element of Muromachi period (1336–1573) Zen culture, ranking second amongst the Kamakura Gozan—the five great Rinzai temples of Kamakura.

With the fall of the Muromachi Shogunate, both the temple compound and the sect of Engaku-ji fell into decline and subsequently suffered damage by fire and natural disasters. However, the fortunes of Engaku-ji began to improve near the end of the Edo and into the Meiji period (1868–1912), due to the efforts of the 189th head monk Seisetsu Shucho, and later, Imakita Kosen. Kosen’s disciple, Shaku Soen, rebuilt the meditation hall and fostered the spread of Zen to the general public, thus building the foundations of the present day Engaku-ji. This hall seems completely isolated from the everyday world; it is here that monks conduct ascetic practice in a strict Zen style.

Engaku-ji is laid out in a manner characteristic of a complete, seven-structured Zen temple compound. The sub-temples are arranged according to the topography of the valley, giving the appearance of being hidden in the shade of the trees and shrubs, which gives the overall effect of a quintessentially Zen atmosphere.

Engaku-ji holds a wide variety of events throughout the year, such as zazen sessions at dawn and summer lecture courses, in which to experience Zen culture.

The ancient masterpiece in both modern and classical Japanese

The first of 20 volumes in the series of essentials, Reading the Japanese Classics, in both classical and modern Japanese. This ancient book—the oldest written text in Japanese history—recounts tales of the gods, the land, and the Emperor. A moving work from the creative minds and dynamic world-views of the forefathers of Japan.